…and other stories! I only spent 4 days in Myanmar, but it was there that I collected the most and the best stories from my Asia adventure. 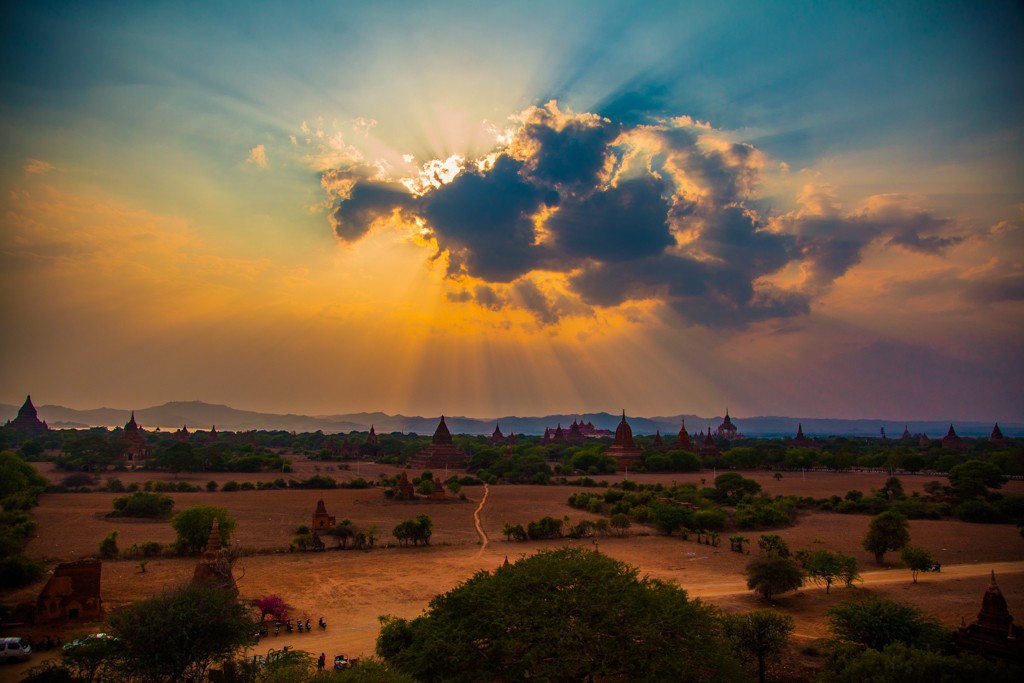 At the airport in Mandalay, the ground crew line up in a row and wave goodbye to you when your plane is taxiing towards the runway. That’s the kind of country Myanmar is.

I had very little knowledge of Myanmar going in, which is unusual for me. If I’m being honest, I saw a cool photo of Bagan on Pinterest and decided to add it to the trip. I didn’t know it was the off season in Myanmar, which means what few tourist services they have there are shut down. There are less buses, boats, and fellow tourists — and therefore, it’s harder to get around and be sure of where you’re going in a country of limited English speakers. It was also over 100 degrees fahrenheit in some places. Bagan got up to 110°F (43°c) when I was there. It’s also a country very low on the economic success ladder. It’s very similar to Togo (West Africa), another country I’ve visited twice and love, so I wasn’t altogether unfamiliar with the vibe, but it’s certainly not a country to visit if you’re not comfortable with exposure to extreme poverty. Myanmar has one of the largest income gaps in the world, and ranks 150 out of 187 countries on the Human Development Index. It wasn’t until 2011 that the military junta controlling the country was dissolved, and before that visiting Myanmar wasn’t recommended by many. Getting into and traveling around Myanmar still isn’t easy. 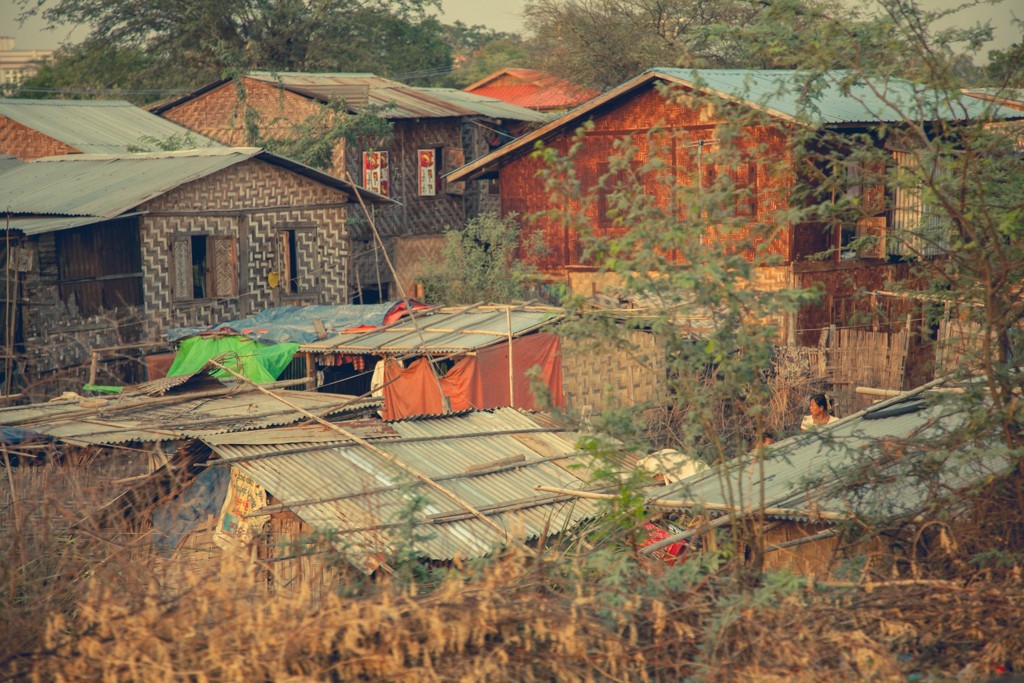 The start of my journey there wasn’t great. I took out way more than I needed at the airport ATM accidentally, then I got ripped off by a taxi company to get a ride to the bus station. Thirty minutes later, I was dropped off at what didn’t look at all like a bus station apart from the 5 or so buses parked every which way in a dirt lot, surrounded by filthy market stalls. I couldn’t find any central terminal or check-in counter, so I went in the building in the center, where there were people sleeping on the floor, people selling sad jewelry and produce, and a horribly dingy room with an old TV hanging from the ceiling playing a subtitled TV show where there was a woman in a bikini whose body was completely blurred out (to censor it).

I wandered around for a few minutes and found an office with really young Burmese men blasting horrible club music through cheap speakers. There was no sign anywhere except a small faded poster on the window that displayed the bus routes in Burmese, that indicated this was the right place to be. The boy inside the office insisted I was in the right place and told me to sit. I asked “why am I sitting in here if my bus isn’t leaving until 5?” (it was only 1:30pm at the time) and he had no idea what I was saying. He just laughed and shrugged. I sat for about 20 minutes before asking “is there food around here?” another shrug. I made the gesture and hand motions for eating, and a woman sitting next to me decided to help out and said something to the boy in Burmese which must have been “she’s asking about food” because when she did, his face lit up and he said “there!” and pointed through the wall to an unknown location. Helpful. I said “okay, I’m going to eat” doing my best to convey this through hand gestures as well.

I proceeded to exit the depressing, run down, unbelievably hot office (no AC) and looked out to across the dirt lot to a stall across the way that was, indeed, a restaurant of sorts. I walked over and to my delight, the owner actually knew a tiny bit of English. He asked “chicken or beef?” the base of pretty much every meal in SE Asia. I said “vegetables” and he knew what I meant, and brought me rice, cabbage and stuff in a stewy broth, and unknown fruit that tasted sort of like pear. It wasn’t terrible. There was an emaciated dog sitting at my feet. And a fish head in the sink in the bathroom.

After another 3 hours playing peek-a-boo with a kid at the bus station, I was crammed on to an ancient minibus next to 2 monks (who originally refused to sit next to me) and journeyed for 5 hours down to Bagan, where the bus driver couldn’t find my hostel, and I was the last dropped off at the end of the night. My hostel (Ostello Bello Bagan) was great through, and it was run by Italians and had Italian food which was a very refreshing departure from Burmese food. 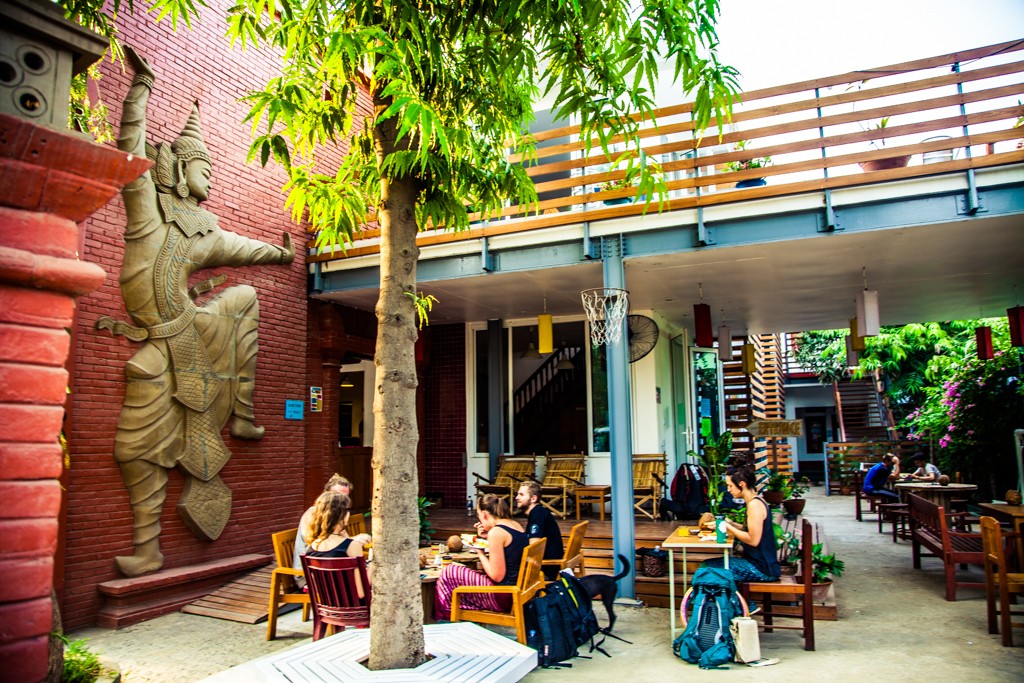 In Bagan I had to rent an electric scooter (they call them ebikes) to see the famous pagodas and temples. They are too far apart to walk to, and the donkey-pulled carts are painfully slow, so it is by far the best way to see them. I’d never rented a scooter before. I’d swore to myself I would never do that in a foreign country. This was different though… there were virtually no other vehicles on the roads in Bagan. They were empty. And these ebikes topped out at 25mph. So if I did wipe out, it probably wouldn’t be more than a bad scratch on my leg. I had to do it. I rented the bike the first day and explored 4 of the bigger pagodas, and met an artist at one who was absolutely adorable. I bought one of his prints as my only souvenir the whole trip. 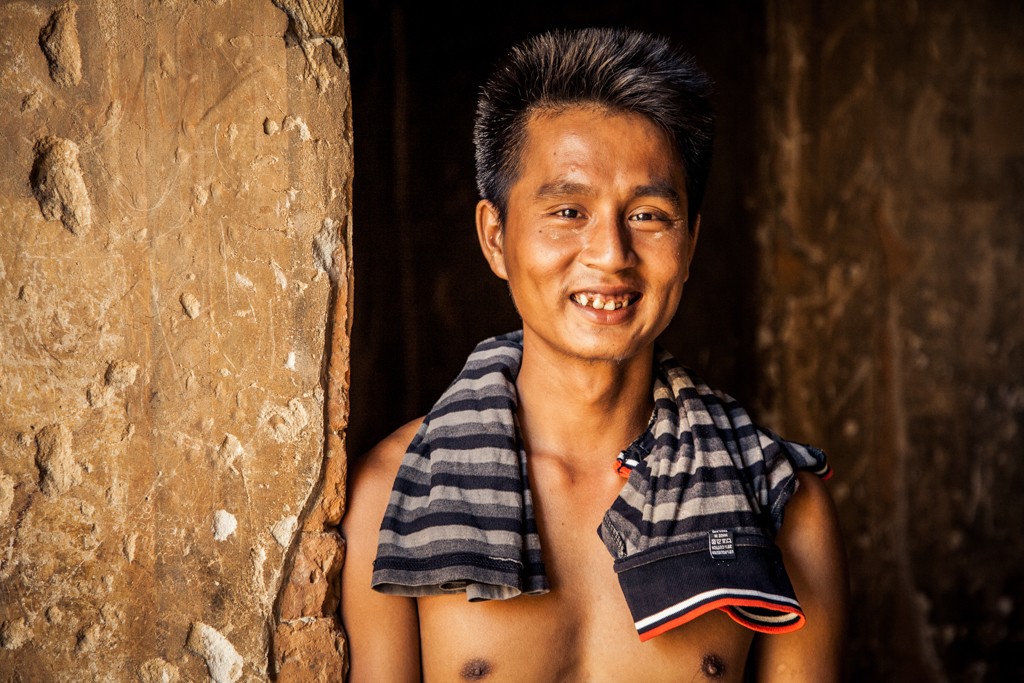 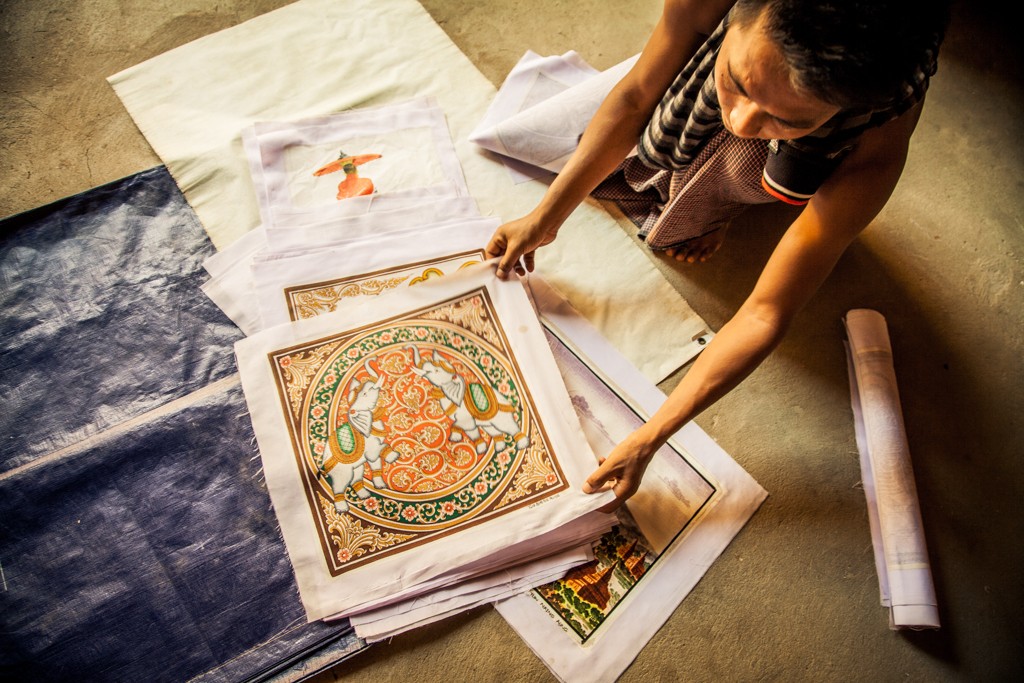 In all the pagodas, you have to take your shoes off to go inside or climb the outside of them. They are made of stone and brick, so its like walking on a brick oven. Your feet get calloused and you learn to just deal with it. A very interesting challenge. At the biggest pagoda, Shwesandaw, there were a lot of monks there on a pilgrimage, which was fun because they are even more excited to be there than you and they take more selfies and photos than average tourists. I met one from Vietnam who was asking me questions about America and wanted to take a photo with me 🙂 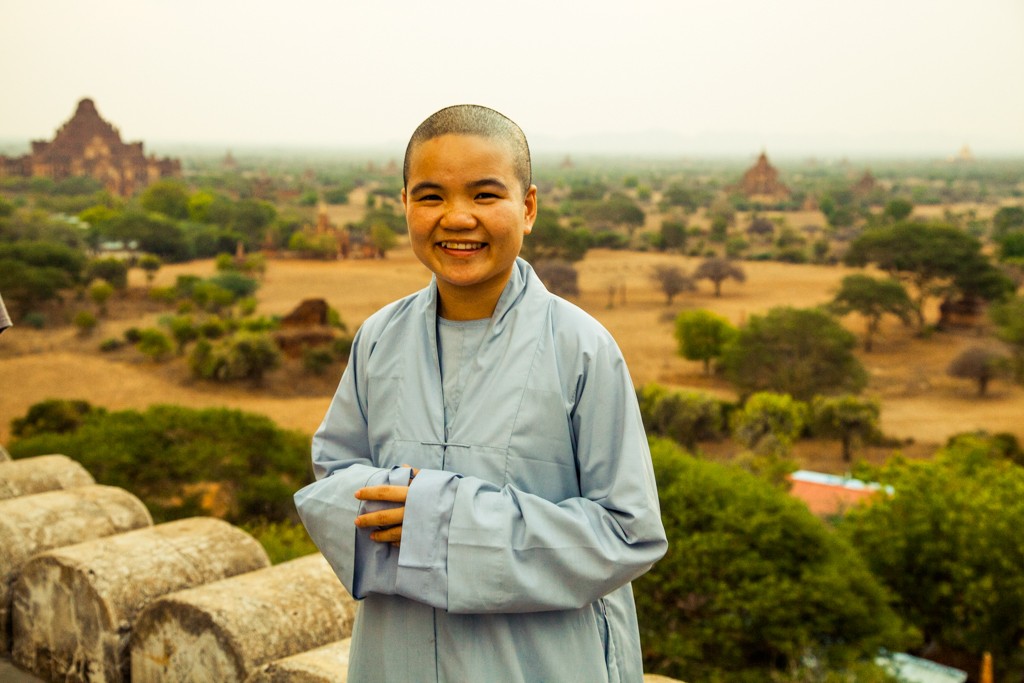 The view on top of Shwesandaw was incredible. I must have spent 3 hours up there despite the heat. 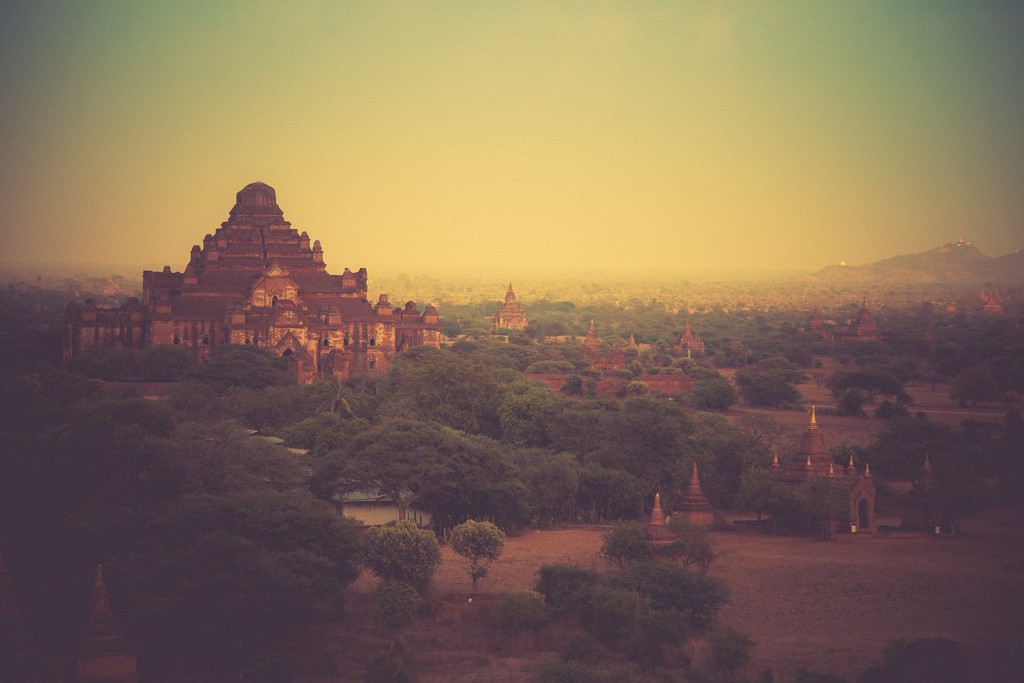 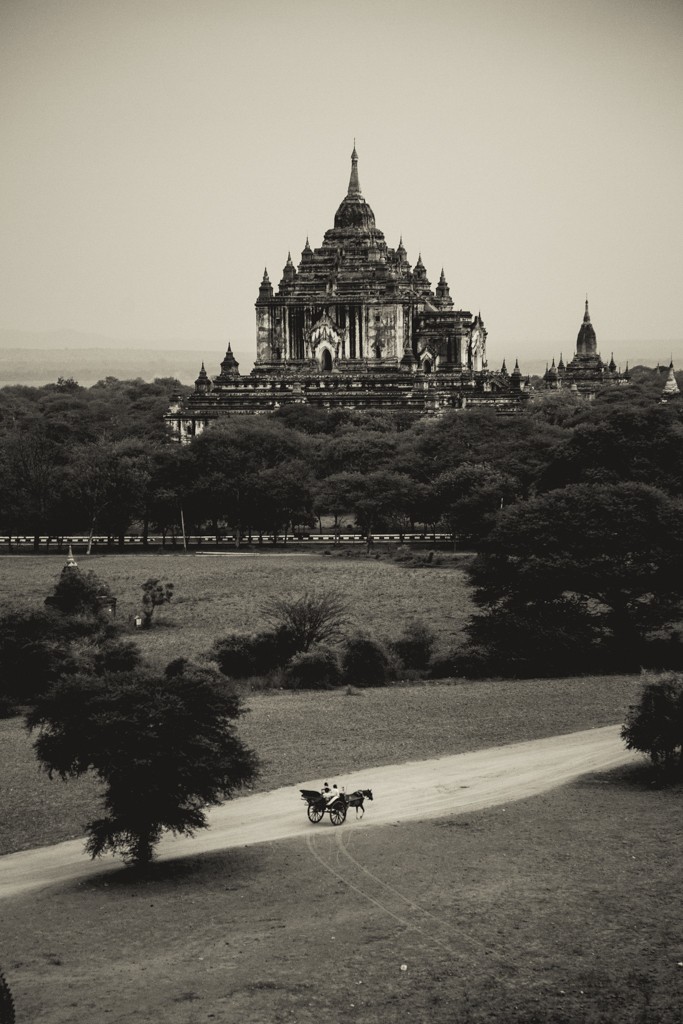 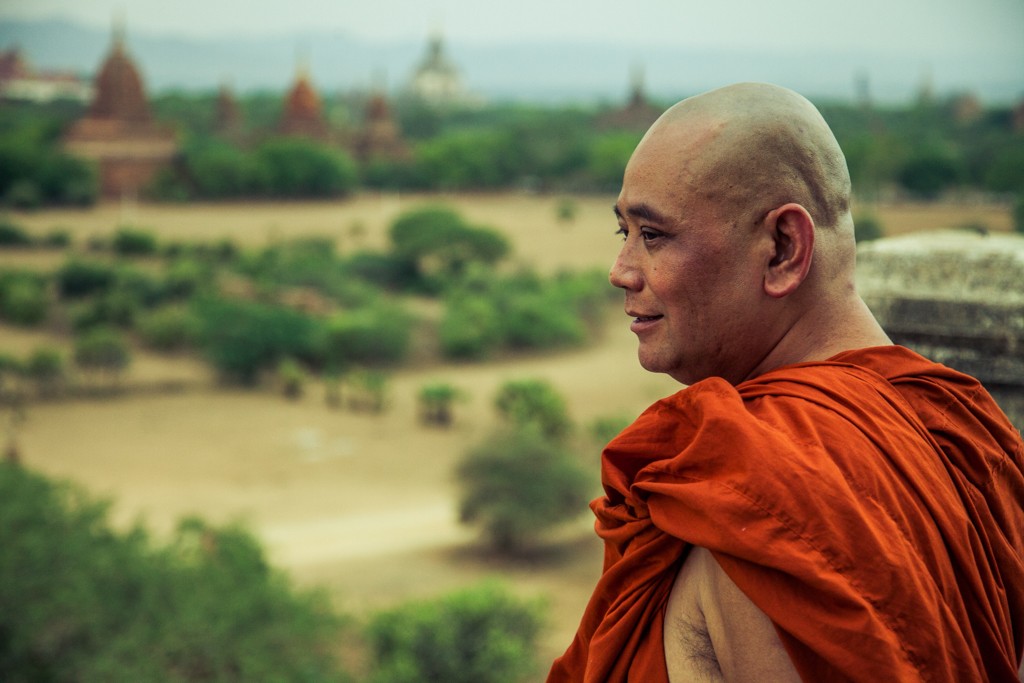 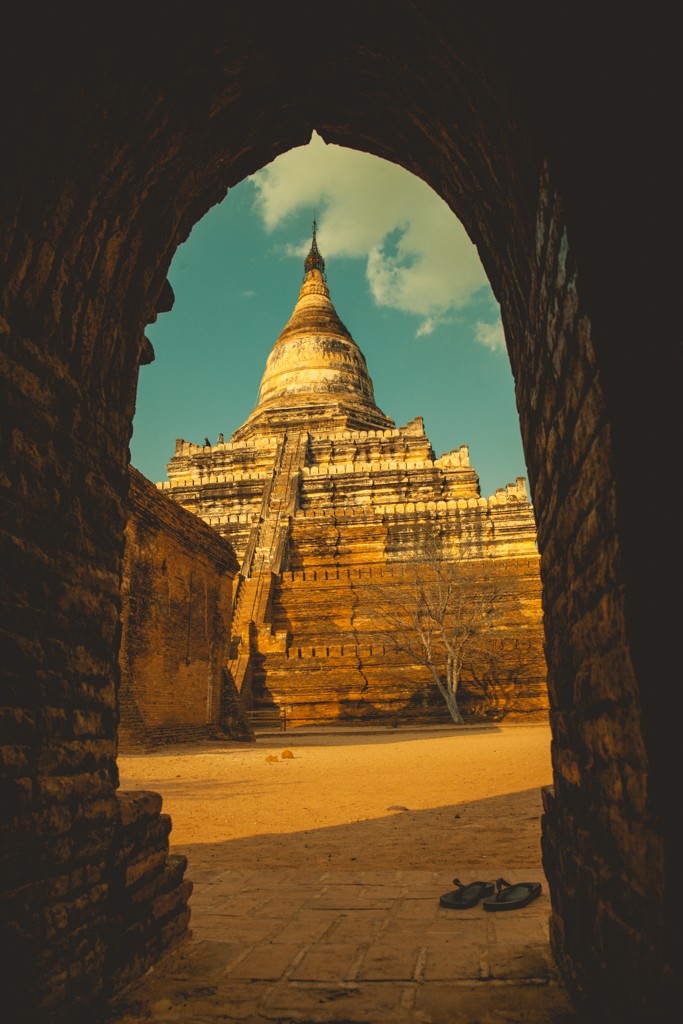 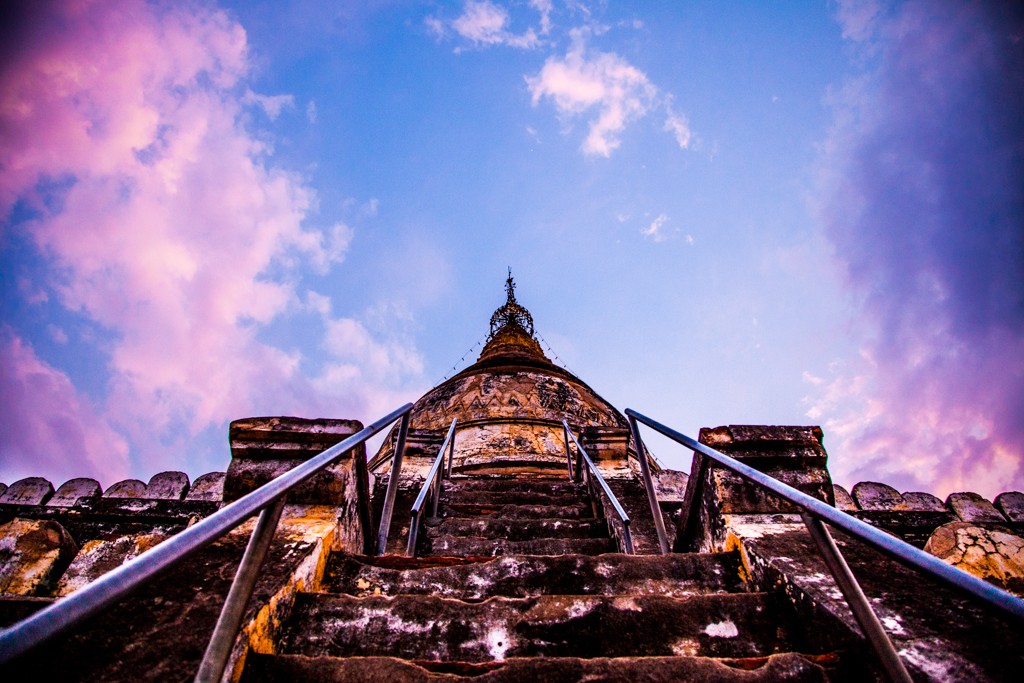 The next day, I set off at 4:30am before the sunrise to find a keymaster! In the small amount of research I did do on Myanmar, I found out that if you want to get into the pagodas for sunrise, you have to find the “keymaster” who lives somewhere close by, usually in a hut, who has the key. They are used to letting people in before sunrise, so you don’t have to wake them up, you just have to go find their little hut and call to them, and out they come with the key and lead you in.

I set off on my ebike, feeling a little wobbly but confident since there was nobody else in sight. I had my map with me, and I sort of knew how to find the pagoda I was looking for. I first found the big pagoda I’d been to the day before, after almost running over a snake… then, I asked directions from some kids. They pointed me down a small, narrow, crazy looking path behind Shwesandaw that didn’t look as safe for the ebike. I rode it as slowly as I could, and came up to a pagoda that looked right. I parked my ebike, struggling to put the stubborn kickstand down. Around the corner I spotted some huts off in the distance. It was clear the pagoda was still locked, so I was definitely the first one there. I walked up to the huts and said “hello?” and a little girl, about 13 years old, came out to greet me. She led me around to the front, unlocked the temple, and led me to the secret staircase to the top that I would have never found on my own. It was so narrow I had to crawl on all fours to get through it to the top. When I did, the girl had disappeared. I was met with a glorious view of the surrounding stupas dotting the landscape, and about a minute later, the sun came up over the horizon. 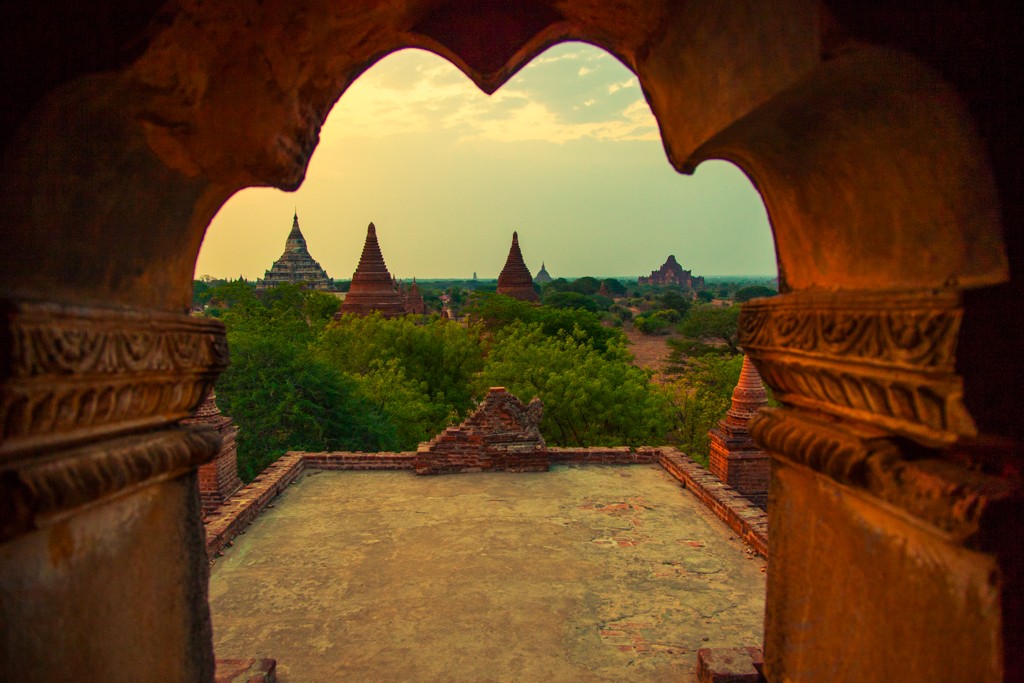 On my way back to Mandalay from Bagan, I was on a proper bus, which was playing Burmese music videos on a small screen at the front. They were so wonderful. One featured a couple who’s car broke down and they went through every stage of emotion from frustration to anger to happiness that they had been stranded and they embraced at the end and then there was a random woman on a bench hugging a little girl. Highly entertaining. Some of the Burmese people were loudly singing along to the music videos too – did I mention they were sing-along videos complete with the scrolling text at the bottom? Had it not been in Burmese I may have joined in I was so bored.

In Mandalay, I stayed at the only hostel in town, the famous (literally) Yoe Yoe Lay guesthouse. “Mama”, the owner, introduced me to a few other travelers there after giving me fruit and water, and then we all went down to Mandalay Hill. I didn’t know what Mandalay Hill was, so it was quite a fun surprise. It wasn’t your average hike up a big hill with a view… I’m not even sure how to describe it, but the views on the way up are a bit obstructed… still pretty, but obstructed by the temple/market/stair structure that meanders up the hill, so you’re never sure how much further it is to the top. You keep coming up to another giant Buddha or overlook and you assume you’ve made it, only to turn another corner and find another section of stairs. It’s winding and maze-like, and a deceptively difficult climb, especially since it must be done barefoot (like every holy site in SE Asia).

When you finally reach the top, there is a large, open overlook where you can see all of Mandalay and the rest of the hill. Apparently, there is an option for a driver to take you up most the hill with an escalator to the top, but of course we didn’t even know about that, and I’m glad we didn’t. The climb was a great experience and workout. Many of the monks I met atop the hill told me they do the climb every day as a daily religious exercise. The young monks I talked to there were so sweet and bright, wanting to know all about me and my visit to Myanmar. 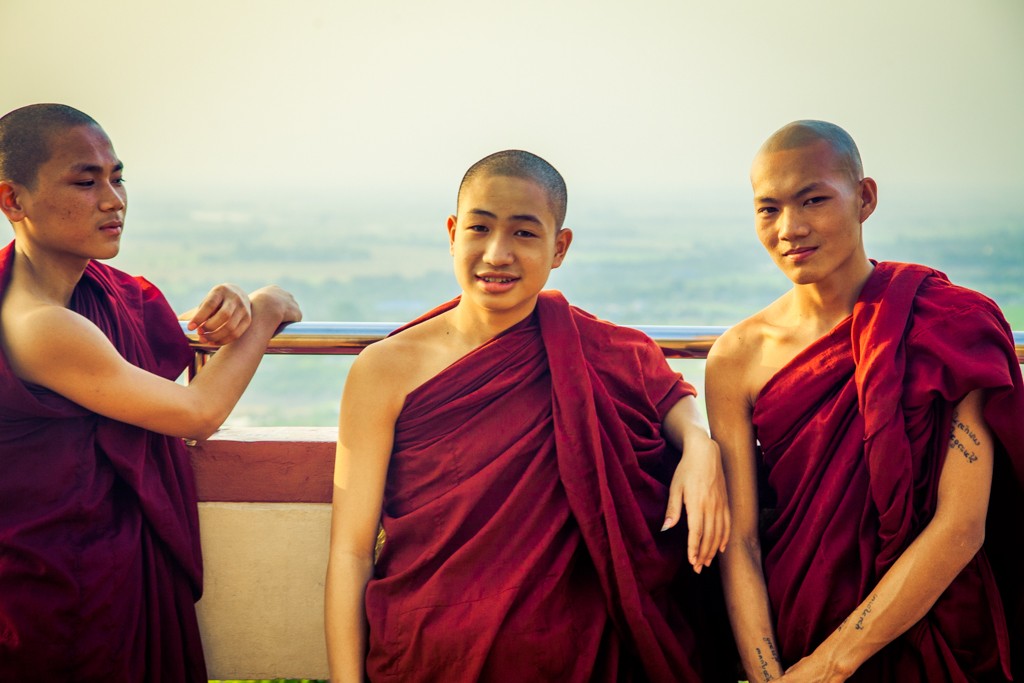 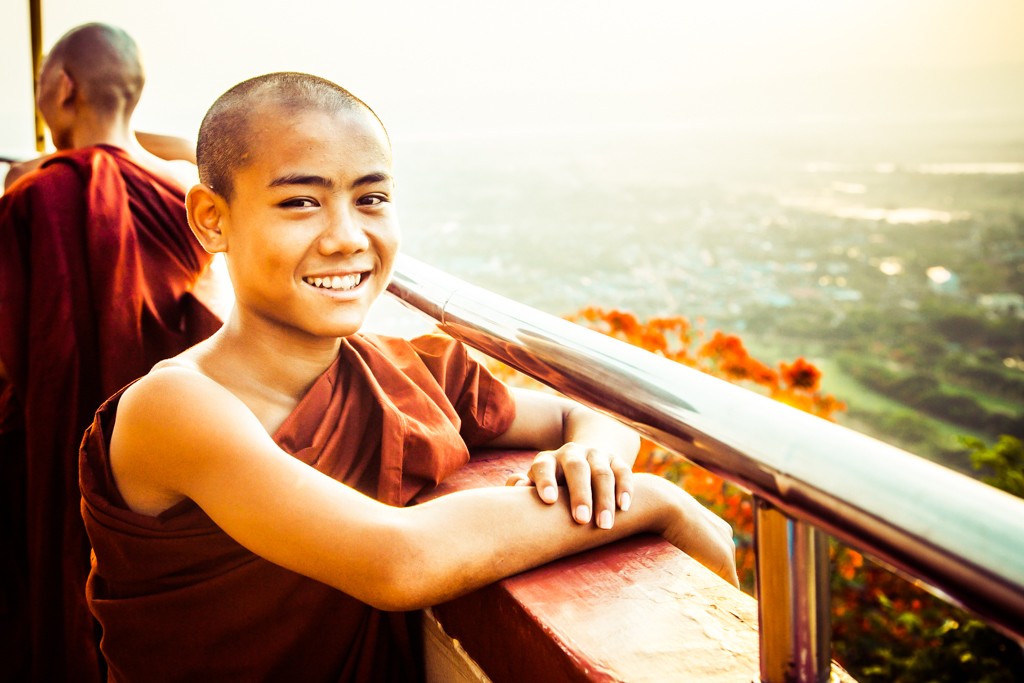 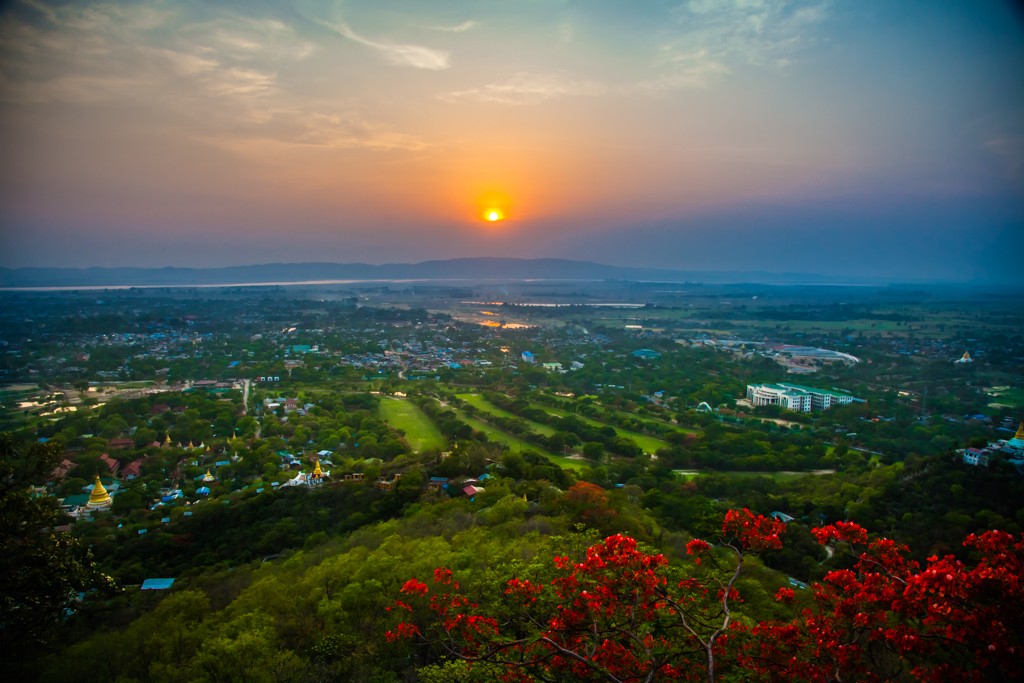 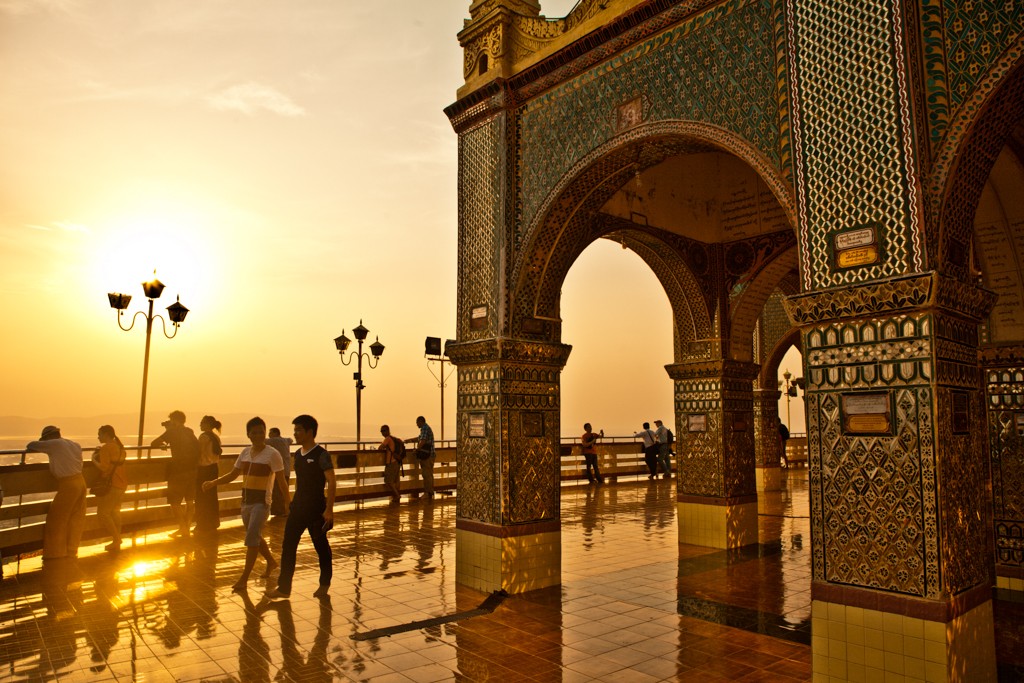 Myanmar was one of the most untouched countries I’ve ever visited, and it was so refreshing to be in a culture devoid of pop culture and western influence. There is so little crime, you feel safe even in the most impoverished areas, and the people are so happy to help you, and actually impressed and thrilled to meet solo travelers. I’d highly recommend visiting, and if you do, stay for at least 5 days.

To see more of my photos from Myanmar, check out my Flickr album here.