I usually research places to death before I visit them, but this time I didn’t have time to do that – so I had to discover Norway as I went, which was equal parts fun and inefficient. It cost me some extra time and money, but it was also nice to have no expectations, and to have to rely on locals to help me decide what to do and how to get there.

Based on my host KJ’s recommendation I went to a park called Vigelandsparken that has beautiful ironwork gates and hundreds of sculptures by just one artist – Gustav Vigeland. Some were joyous, some dark and haunting. It was a cold and refreshing walk and also a great opportunity to people watch. There were a lot of families there, some with babies and small children who didn’t seem at all bothered by the extreme cold. These people are eskimos! 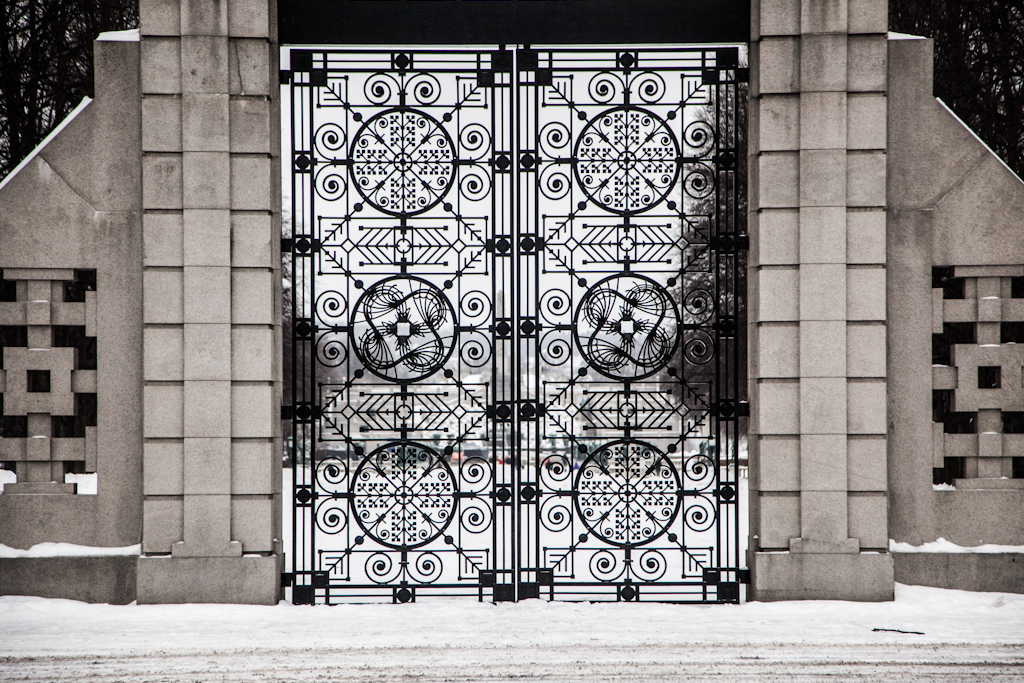 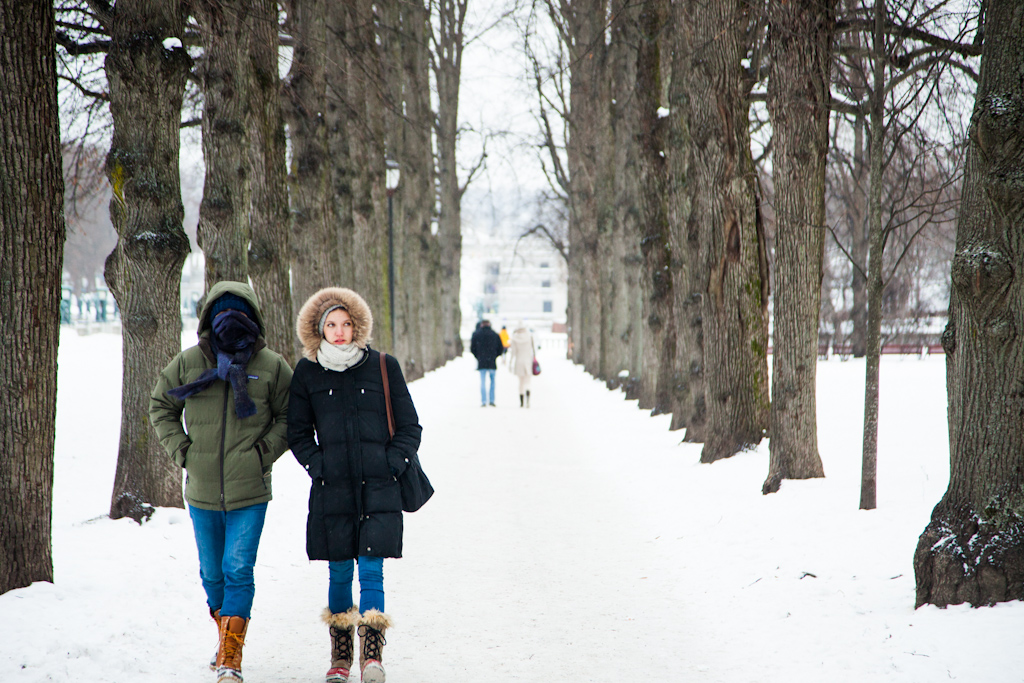 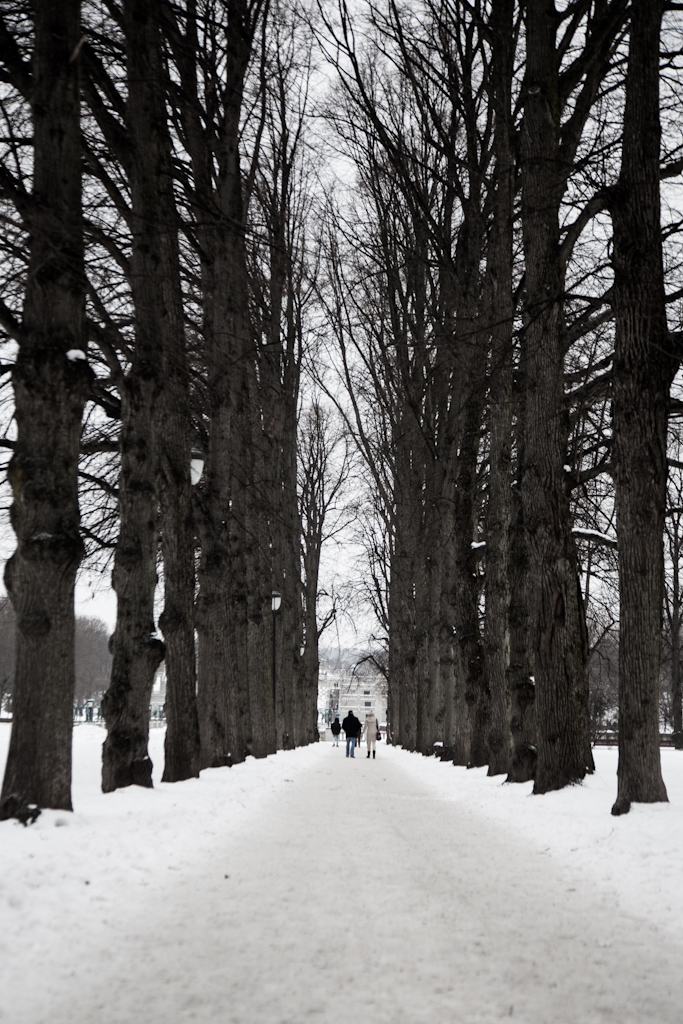 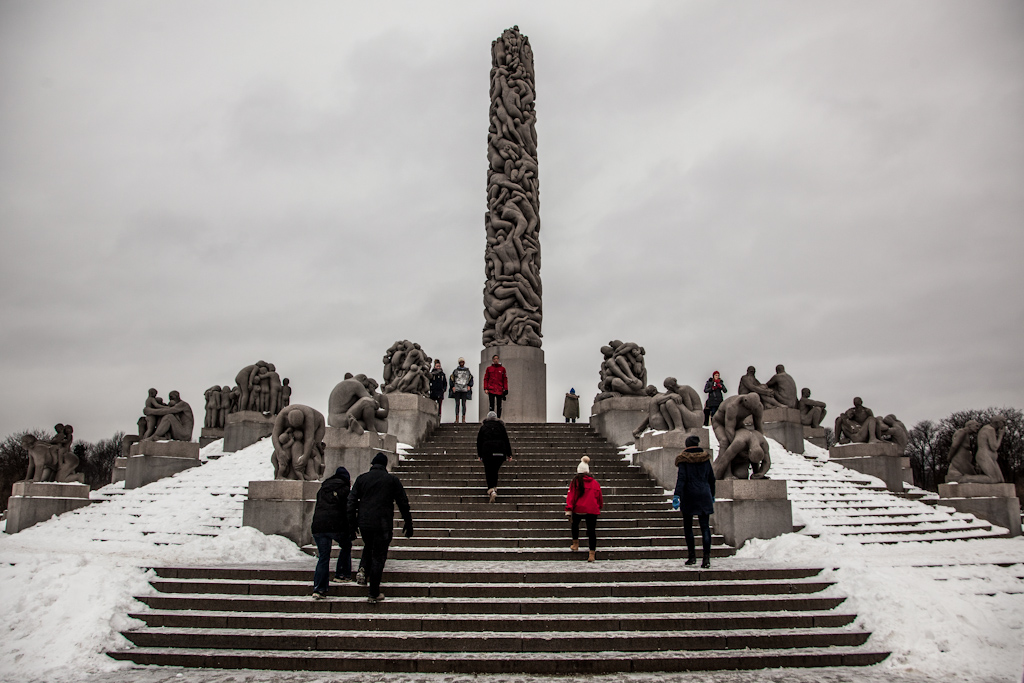 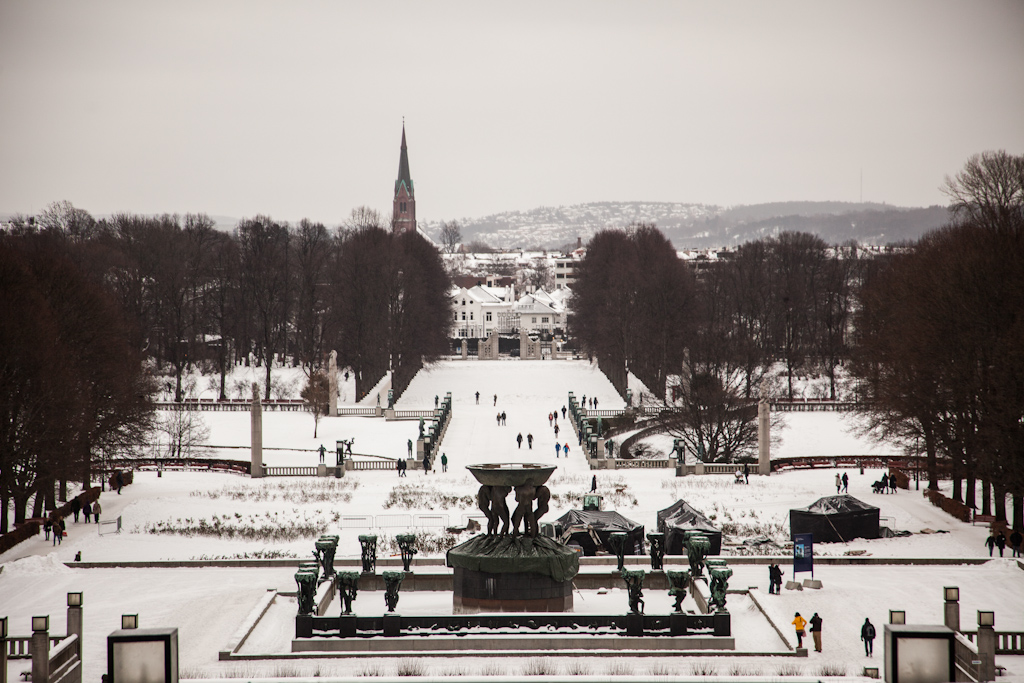 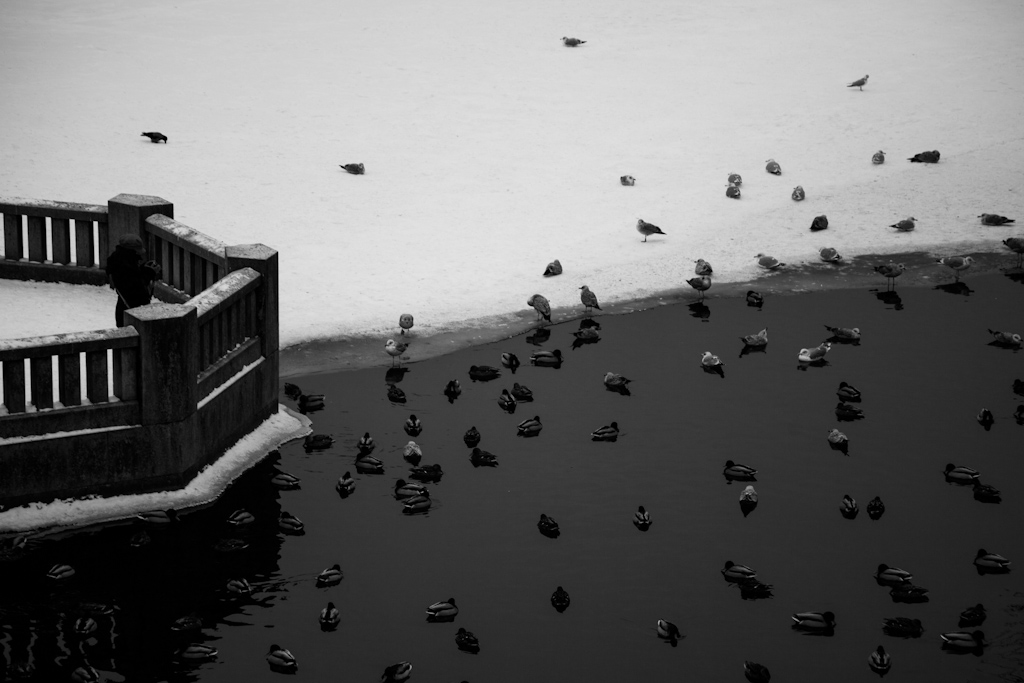 Later on I stumbled upon the royal palace, which I embarrassingly thought was a relic of a past monarchy until I was informed by my hosts that Norway is still a kingdom with a very reality-show worthy royal family – a funny and personable King and Queen, and a Crown Price that married a crazy bad girl who is now the Princess! Fun! 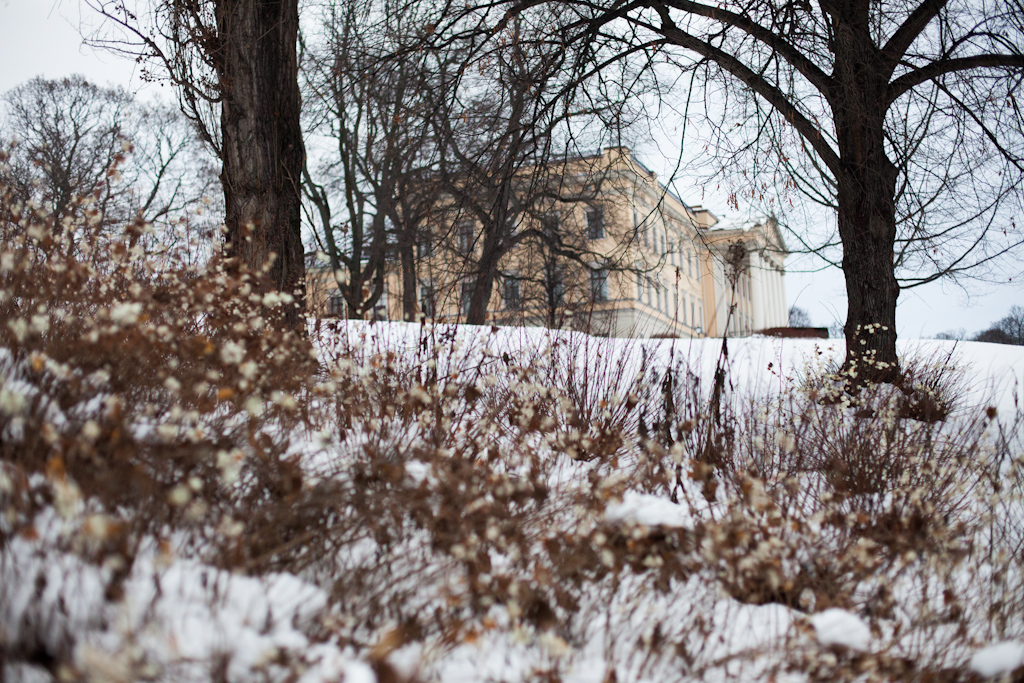 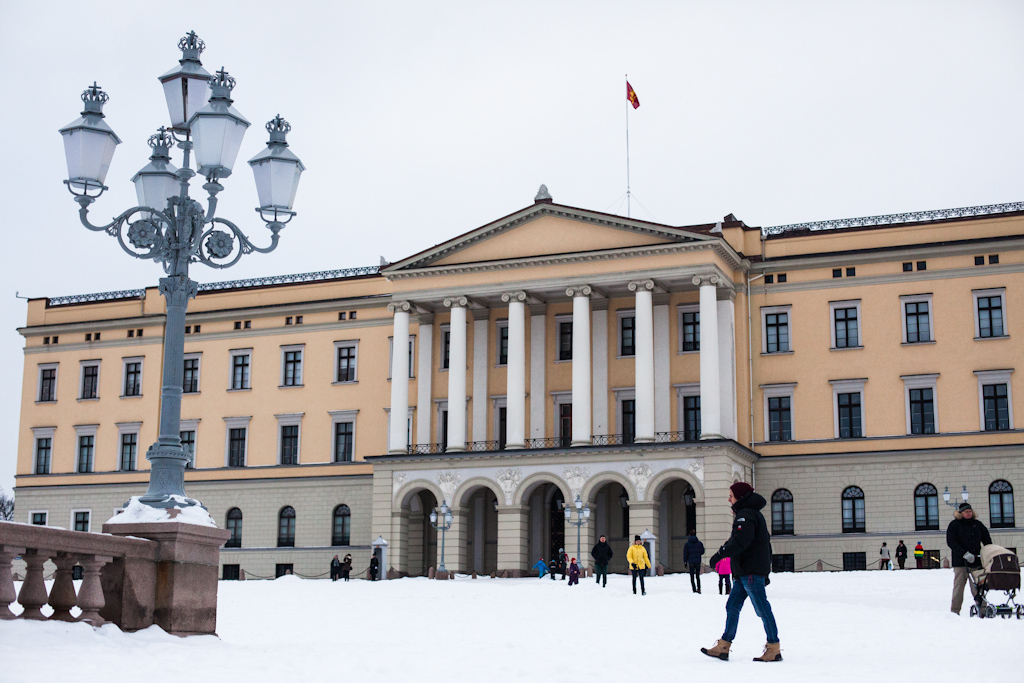 A new friend I made who is a Russian architect living in Berlin recommended I go to a modern art museum (called the Astrop Fearnley Museum of Modern Art) It had a very colorful and happy collection (well, for the most part) and a few very high-profile Damien Hirst pieces that were a nice surprise. I almost missed them too, since they were in a building separate from the main museum which I didn’t realize was part of the museum at first. See my separate Astrop Fearnley post if you’d like to see the art!

I feel I must report that Norway is indeed as expensive as the travel sites have warned, and that despite my very diligent attempt to be frugal, I have spent way more than my allotted budget (which was highly idealistic). I did save quite a bit by buying some of my food at the grocery store, being treated to lovely Norwegian pancakes and grilled cheese by my hosts and finding very cheap pizza at a street vendor — but then I failed miserably when I got hungry in an expensive and remote area of Oslo and all I could find was a cafe that had 150nok sandwiches and I also caved and got a 50nok coffee because I was still suffering a bit of jet lag. That one VERY small meal was 200nok or $32. OUCH!

Lesson learned: if you are traveling to Norway on a budget – even if it sounds silly, pack yourself a lunch and plan to be ‘home’ for dinner every day. It’s also tempting to eat inside somewhere just to warm up. That’s how they get you! There are not many warm places to sit down and eat a pack lunch in the winter. The bus or a mall would be an ok place. Another good money-saving technique I learned is that the tram drivers never, ever check your ticket or ask you to swipe it. Which means you can easily get away with not buying one at all and just ride the trams for free. (I did pay for mine, I just never swiped it!)

My favorite areas in Oslo were Tjuvholmen and Grünerløkka. Tjuvholmen is right on the shoreline of the fjord, and has tons of incredible new apartment buildings, shops, cafes and the beautiful Renzo Piano designed Astrup Fearnely museum. 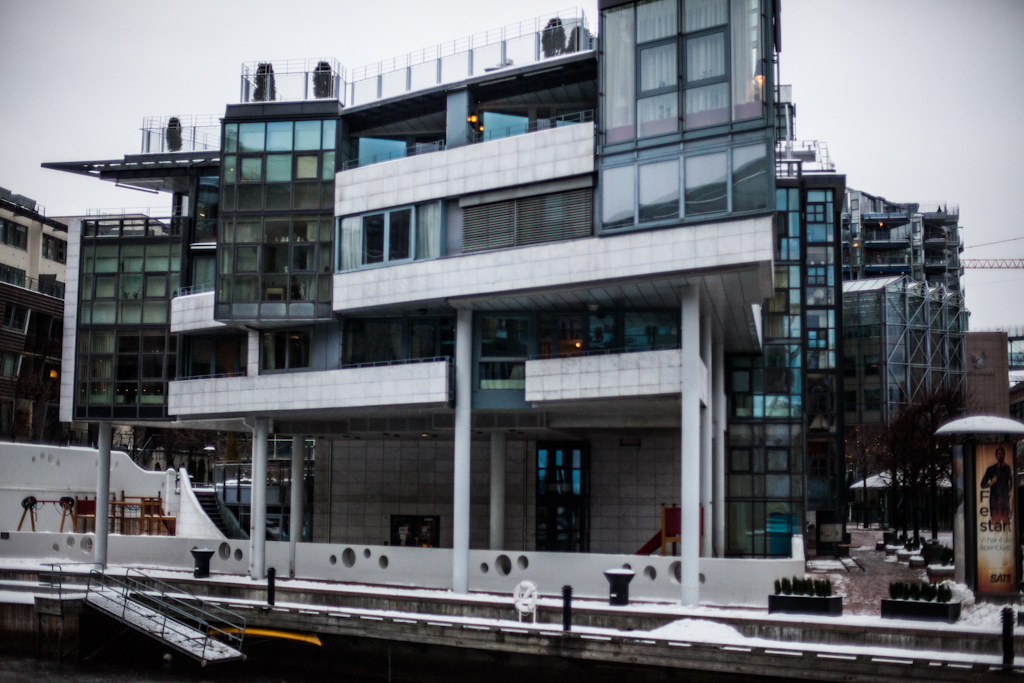 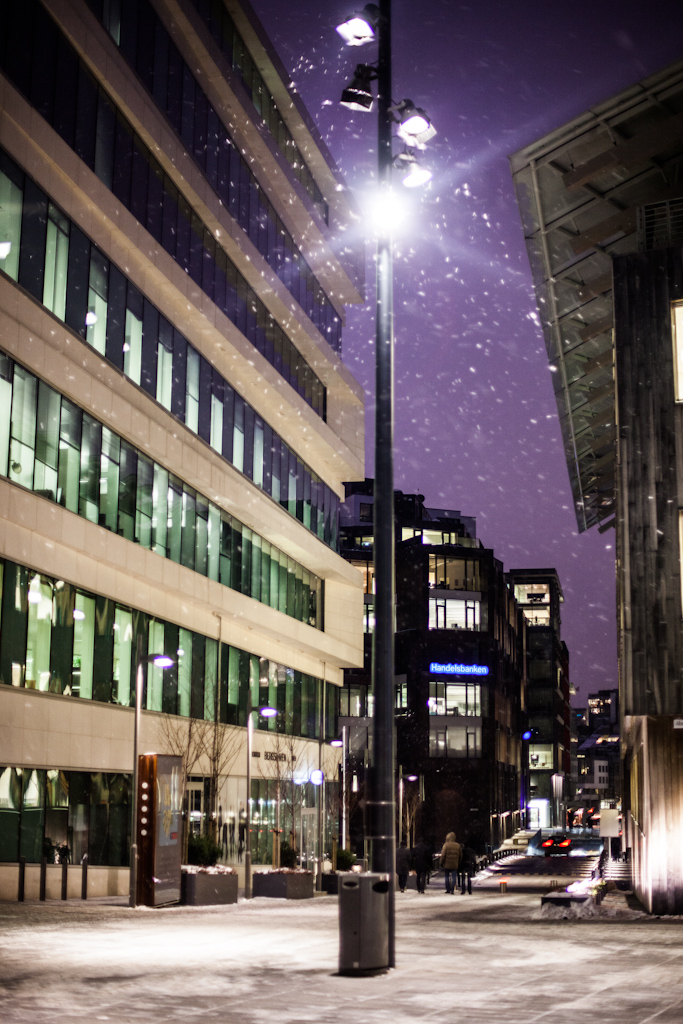 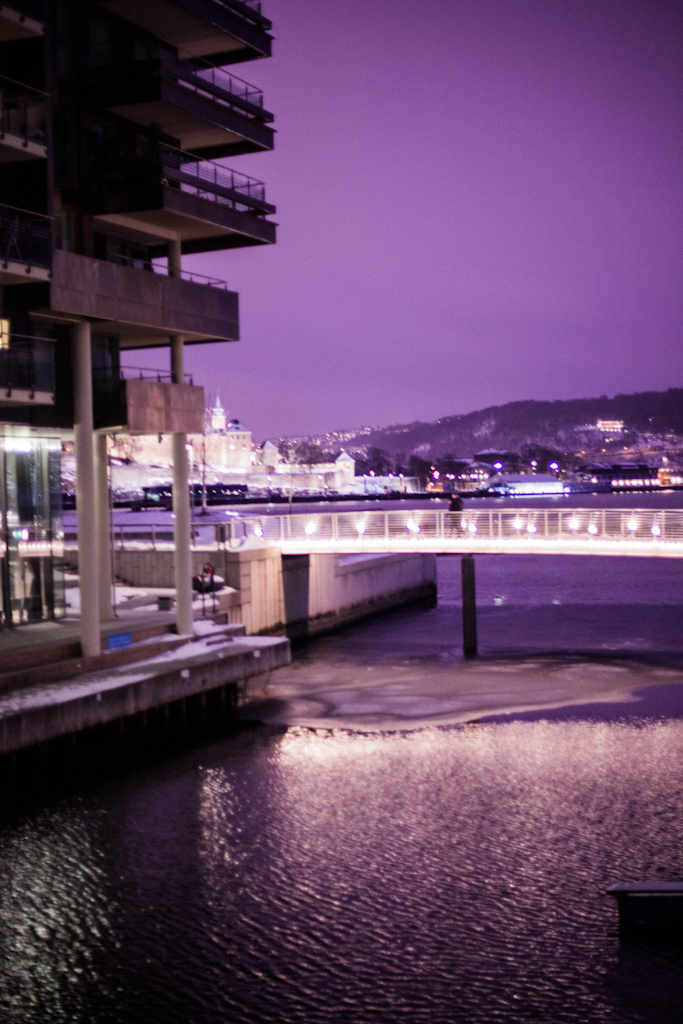 Grünerløkka is basically the ‘hipster’ area of town, with cool little bars and cafes. Walking through the snow to find a bar was fun as it started to pick up and glisten in the street lights. 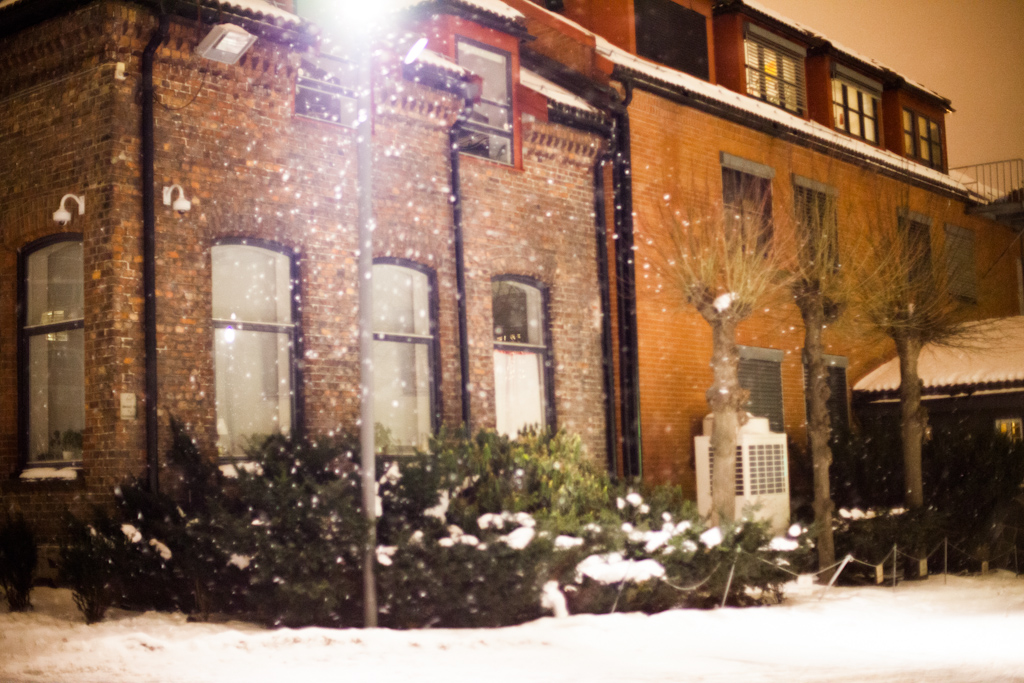 Once we found a cool bar, the Parkteatret – my friend Ayuna and I sat down, ordered some aquavit (a Scandinavian spirit) and then started talking to some guys who were trading vintage Christmas postcards. They gave us each one, and to commemorate the occasion I got a photo of my friend Ayuna holding up her new postcard. 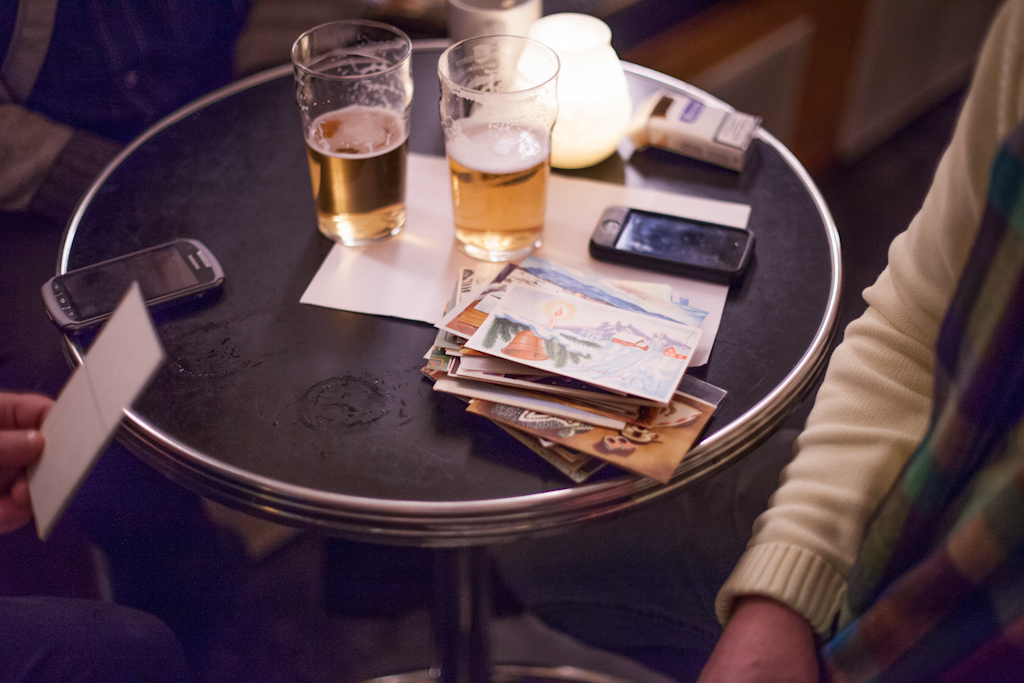 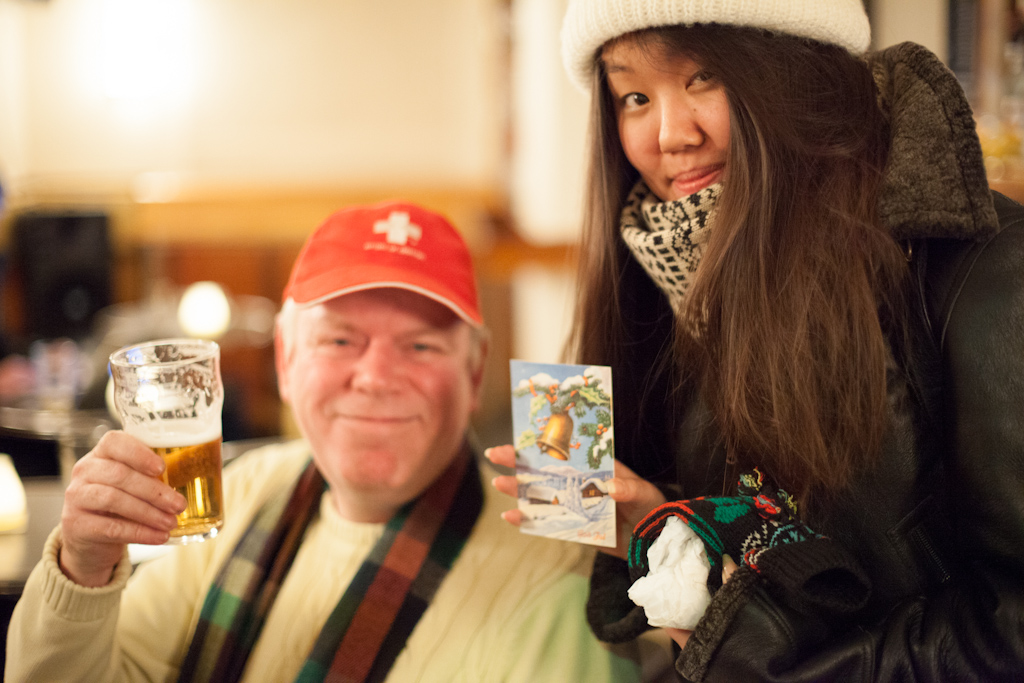 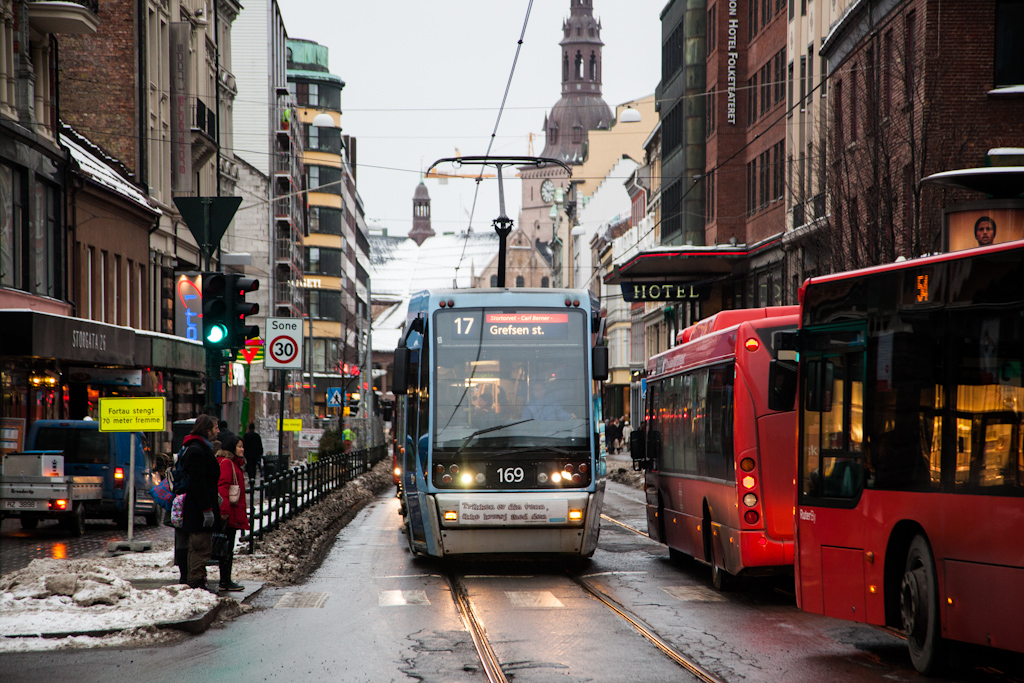 Oslo was a wonderful city… not nearly as cold as a I thought it would be and the locals were warm and friendly. I can’t wait to return some day in the summer and take a boat tour of the fjord!

Next up, Tromsø & the Northern Lights!